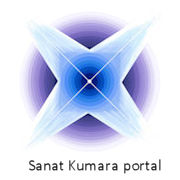 Cosmic Master Sanat Kumara is the Lord of the World, the Ancient of Days.

Sanat Kumara is the head of Shamballa, the retreat of the Ascended Masters believed to be in the etheric of the Gobi Desert.

It is said that Sanat Kumara (one of the seven Holy Kumaras) came to earth from Venus when humanity had sunk to such a level that not one person gave devotion to the god within.

Sanat Kumara is so vast, we are merely one cell of his entire being. And yet, here he is, working with humanity and their Ascension.

He is here to help us with being the Being – becoming one with our own inner Christ. He says, “Your own Christ is your Light”, hence the term, ‘Christ Light’ (another name for Monad, I Am, or spark of God).

He is also known as the Initiator, wielding the rod of Initiation as we ascend beyond the 3rd initiation.

Ascended Master Sanat Kumara's aura is clear like ice with all colours flashing through it.

His portal/painting as shown above is available as a portal card or portal print. His energy flows from the print 24/7. It is wonderful to have him sending his energy into a room 24/7 via the print. You may also place the card on a chakra and receive the Master’s energy directly into the chakras.

Ascended Master Sanat Kumara is working with the Cosmic Master Vajrakilaya at this time.