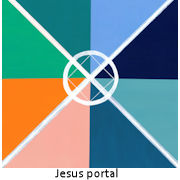 Ascended Master Jesus has recently become Chohan of the 2nd Ray: the yellow ray of Wisdom, Joy and Lightness of Being. As the Chohan of the ray, he focuses the Christ Consciousness of the ray onto humanity. He holds this position because he fully embodies the qualities of the 2nd ray.

Jesus works with the energies of Teaching, Unconditional Love, Joy, Forgiveness and Devotion to the Christ within. Ascended Master Jesus is still a young Master (his words) and he calls himself “the young one". This shows his sense of humor. Master Jesus loves to sing, and he has Mastered Lightness of Being. He is fun. He can be serious, as we all can be, but his innate Being is Lightness and Light.

When we painted his portal painting (above) together, he showed me no face - only a bright, white light. He wanted me to know he wasn’t a face or a body; he was energy- the energy of Joy and Lightness of Being. It was from him I learned to give Devotion- not to external Beings, not to an external God, but to the Christ Being within myself. For we ascend first into our own Higher Self and then into our own Christ Light.

One of my gifts is to travel to the past lives of others. Jesus permitted me to travel with him to his Jesus life. He showed me in that life that he was a first ray soul (the ray of God's will and power) and that his ascension ray colour was a light blue. One of his lessons in that life was balance. His life ray was the 3rd ray, the ray of unconditional love. I could feel when he was younger he was happy and had a great sense of humour, but as he aged he became very serious.

For more advanced knowledge, note Christ is the name of Jesus’ Higher Self (just as you all have a Higher self and that being has a name). When we talk about Jesus the Ascended Master, we are really talking about Christ using the name of Jesus. The Jesus life was merely one of thousands of lives that were part of that soul’s ascension process to their Higher Self.

Look at the image of Jesus’ face to the right; this is the closest image I can find that actually looks like him. He often appears with no beard at all or with designer stubble. His eyes are brown, and he has a dark olive complexion.

His imprinted portal painting you see above is the second one we painted together. There is another painting beneath this that we painted first where yellows and oranges are the main colours. He overlays the first painting with the denser colours you see here to come closer to humanity. 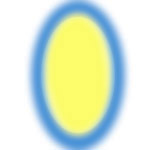 Master Jesus was previously working on the 6th ray, but he has now moved to the 2nd ray. This move is reflected in his aura colours as shown to the left: a yellow centre (the colour of his ray, the 2nd ray) and blue (the ray he was on in his life as Jesus, the 1st ray of God's will and power).

Master Jesus is working also with the Cosmic Master Omega.

Ascended Master Jesus channeled his portal painting as shown at the top of the page. His energy flows from it 24/7. It is wonderful to have him sending his energy into a room 24/7 via the print to help those present. You may also place the card on a chakra and receive the Master’s energy directly into your chakras. Click here for the print and the card.