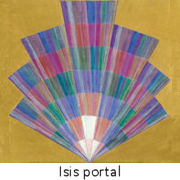 Ascended Master Isis was the Egyptian goddess of Motherhood and fertility. Now she is a goddess of the 6th ray; the purple, ruby and gold ray of the goddess and devotion.

Isis has a refined and gentle energy. Her great power is quiescent. She has a gentle sense of humour and her energy is that of a mature woman.

As we ascend, more energy flows through our systems. Isis is here to help us cope with the changes, not just on a physical level, but also emotionally and mentally. Her words: “Things don’t happen to you, they happen for you.”  She is also helps with sensuality, sexuality, sexual energy, the divine feminine within, and feeling good within your body. If you have body issues, then she is a good Master to call up on.

Ascended Master Isis is working with Cosmic Master Eros at this time. 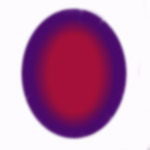 Ascended Master Isis’ aura has a border of purple with a jagged edge that leads into a ruby centre (as seen to the left). 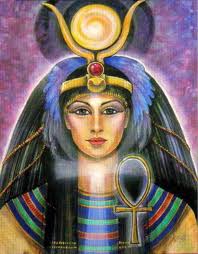 If Isis were to appear in form, she has straight black hair to her shoulders and a fringe across the top of her eyes. She wears a gold floor length dress with a belt at the waist and around her neck is an enameled fan shaped necklace of blue, green, yellow and red. There is a refined, ethereal quality to her energy.

Ascended Master Isis channeled her portal painting (as shown at the top of the page) through Verna Maruata utilizing her two crown chakras. Isis energy flows from the painting 24/7. It is available as a card or print. It is wonderful to have the print sending energy into a room. You may also place the card on a chakra and receive the Master’s energy directly into the chakras.