Dimensional lives are often erroneously thought to be lives of an individual replayed across dimensions. Not so. Each dimensional life in your collective has a soul that is unique to them.  Each is a unique individual just as you are. They are separate from you. What makes you all part of a collective is that you all have the same Higher Self.

A single Higher Self oversee's many souls both in body and out of body up until the 5th initiation. These souls are in groups of 3. So, you will have two beings in two other dimensions which are part of your trio, and these will be closest to you energetically. These dimensional lives will occur as a total group of 3 (including you) or 6, 9, 12, 15, 18, 21, 24, 27 etc.

Do not confuse this soul collective with a soul group. What is commonly referred to as a soul group is the group of souls you reincarnate with life after life in this dimension; they are the ones that come to assist you in your life lessons. Also, your soul mates and twin flames only occur in this dimension. Your dimensional lives have their own soul mates and twin flame in their dimension. 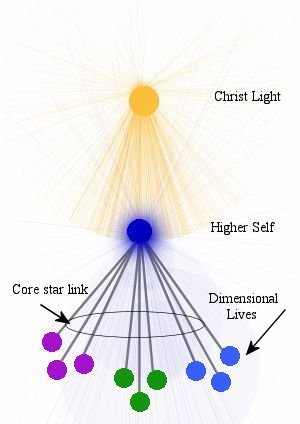 All these lives/souls of a single Higher Self contribute to the ascension of the Higher Self. One of these souls will pass the 5th initiation first, leaving the cycle of rebirth first. This single person then has the sole and soul responsibility to assist in clearing all the karma of all the other dimensional lives, whether in body or not, of the Higher Self’s collective of souls. Part of the process of moving from the 5th to 6th initiation is to clear the karma of all the dimensional lives through the perfected chakra system. The perfected chakra system allows karma to be cleared at a greater rate.

Can there be people here in this dimension, either on this planet or other planets, who are part of my dimensional lives collective?

No, the collective is multi-dimensional. In this dimension, across the entire universe, you are the only representative of your collective. Looking at our entire universe with all its planets, you start to get an idea of the immense scale of dimensional lives and how many Higher Selves there must be. We have 6 billion people in body on this planet, so that's 6 billion Higher Selves to start with. Also, only about 42 Ascended Masters stand with those on this entire planet as ray Masters, though hundreds more support humanity on a less personal level.

Dimensional lives are all souls on their own ascension journey. The person with the most light proves they are worthy for further ascension with the Higher Self. So, it is more one is chosen because they won the race into their own light. There is no battle. Only light prevails. Ascension is the journey from our own darkness into our own light. It is a personal journey. The only thing we battle is our own darkness.

No, they are individuals with their own soul, own Higher Self, and own Christ Light.

I'm confused between dimensions and lives and what I read about the 4th and 5th dimension and the planet’s ascension.

Again, terminology can be conflicting and confusing. To me the answer is no. The Divine Self is the higher level and another name for the Christ Light, spark of God, or Monad. And as explained in the article, the Higher Self is ascending to the Christ Light.

No, each life is separate, and the soul ray pertains to each individual’s soul lessons.

No, the Higher Self can mix them up from life to life. They are not static.

Yes, sometimes it is déjà vu or a feeling of being ahead of yourself. Or you may get a glimpse into somewhere completely different. But for most people, the awareness comes in dreams.

This assumes that karma is paid slowly by a person who has passed the 5th. It isn't. For those passing the 5th with us here at the portal, we are finding karma is paid in weeks.

Explain what happened to the Masters’ dimensional lives please?